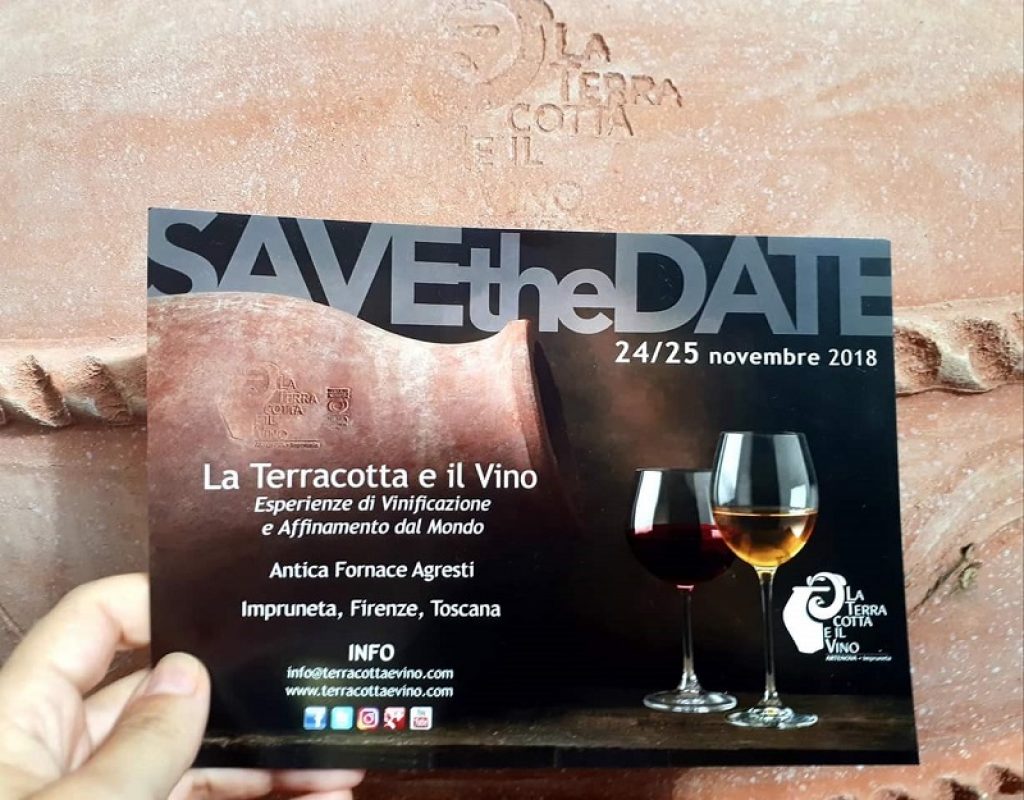 Impruneta, the Capital of Winemaking in Amphora: contemporary winemaking from Italy and across the world at Fornace Agresti. A Weekend of wine, conferences, a wine shop, Slow Food gastronomic specialities, a guided wine tasting session and a “Terracotta Concert” by Handlogic

Impruneta, 24 November 2018 – Impruneta, for a weekend is the Amphora Wine Capital of the world thanks to “Terracotta and Wine 2018“, an international biennial event devoted to the use of terracotta in winemaking that returns for a third edition with its usual great technical and cultural content. The most important event in the world exclusively about wines in Amphora is organized by the Cultural Association “La terracotta e il vino” and is held on November 24th and 25th at the location “Fornace Agresti”. This “new” wine making technique from ancient times began as a niche movement. Today, it is used by contemporary wine makers in Italy and all over the world. The movement of wine producers using terracotta sees the ranks of its enthusiasts growing steadily The event with its 42 exhibitors, was created to raise awareness of the culture behind Amphora Wine and the producers in Italy and around the world who believe in this practice as a quality stylistic choice.

Returning to the third event we see wine producers from Italy such as Foradori and Le Anfore by Elena Casadei, whose company comprises the Tuscan wineries of Castello del Trebbio and Tenuta Casadei and Olianas from Sardinia. Again from Tuscany, making their debut at the event this year for the first time we have Tenuta Il Borro from San Giustino Valdarno and Azienda Agricola Oliviero Toscani Wine from the province of Pisa. However almost all the Italian regions are represented including two producers from Sicily (Bagolaro and Francesco Lipari), from Campania Tenuta Fontana and I Cacciagalli and from Northern Italy Monte dei Roari and Casa Belfi from Veneto. Globally the event features amphora wine producers from four continents: Europe, Asia with Armenia represented by Zorah Wines, Australia by Trofeo Estate and the United States by Montinore Estate and Beckham Estate Vineyard from Oregon. Almost all these foreign producers use amphorae handmade by artisans from Impruneta, using the unique Impruneta clay, unalterable over time and resistant to all weathers and low temperatures. The terracotta producer Artenova is the originator of the “renaissance” of the production of amphorae in Tuscany and is among the partners of the event (the main sponsor is the Banco Fiorentino Mugello, Impruneta, Signa).

Read the list of Italian and foreign wine producers

The Characteristics of Impruneta clay

The Characteristics of Impruneta clay and what happens to wine when it is made in terracotta will be discussed along with the latest results of a study commissioned by Artenova and conducted by the University of Florence. The research studied how the terracotta from Impruneta influences the quality of the wine made inside it. The study began with the analysis of the must before it was placed in the amphorae for fermentation in order to understand its natural content of metals.

Impruneta clay has an extraordinary capacity for thermal insulation so that any wine it contains does not undergo excessive temperature changes during storage. The porosity of the clay is another of its characteristics. This particular terracotta allows intense oxygenation without the wine becoming oxidised or seeping out. The results are recognisable by every wine enthusiast: natural wines that do not have alien aromas because terracotta does not yield aromas it only enhances the character of the grape and heightens the concept of terroir. The miracle of the Amphora is to make the wine feel “at ease”, making it live and breathe as it matures. During “Terracotta and Wine 2018” it will be possible to taste over one hundred wines made exclusively in Amphora.

Oenological Science and Archaeology in a high-level Technical Conference

Prof. Manuel Malfeito-Ferreira, from the Institute of Agronomy of the University of Lisbon will tell us about the uninterrupted tradition of winemaking in Talhas which in Portugal has been maintained over thousands of years. The Armenian Archaeologist Artur Petrosyan, from the Institute of Archaeology and Ethnography of the National Academy of Sciences of Armenia will share his experiences from the oldest winery on earth, Areni 1-Cave in Armenia, where the millennial existence of the Karasi, the Armenian amphora was discovered. The dig opened in 2007 and curiously, Areni 1 is located right in front of the winery and vineyards of Zorah Wines, which had been active for several years before the time of its discovery.

The event (20 Euro admission ticket) has a varied programme including not only wine tasting at the exhibition stands but also a technical conference, a Slow Food presidium, a wine shop where you can buy wines and a guided wine tasting session entitled “Four Continents in Amphora” (booking is recommended). At the exhibition stands you will also be able to taste Amphora Beers from three breweries, two from Tuscany (Birrificio San Gimignano e Birra dell’Elba) and one from Lazio (Birra del Borgo). On Sunday 25 (at 18.00hrs) there will be a concert “The sound of earth” / handlogic: in addition to their own refined music for which they are becoming famous throughout Europe these talented artists will also give a fascinating and unique performance using as musical instruments amphorae, pots, jars and other objects in Impruneta clay.

The organization this year is again entrusted to Sergio Bettini, consultant to Artenova. For admission to “Terracotta and Wine 2018” online pre-registration is recommended. Please write to preiscrizione@terracottaevino.com. The Hashstag of the event is # terra cottoevino2018. Book the guided wine tasting session “Four Continents in Amphora”